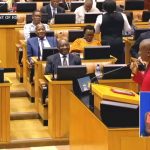 The Economic Freedom Fighters (EFF) announced the formation of a coalition negotiations team, and along with it, released a list of demands.

The list, compiled for the benefit of the African National Congress (ANC) – is quite comprehensive and covers everything from land expropriation and nationalisation to Die Stem.

The party said: “In essence, those who have approached the EFF must be prepared to agree and support these principles and general commitments with deadlines”.

Therefore, anyone who wants to align with the EFF should commit to the following resolutions: