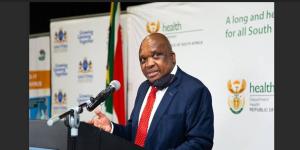 Here is South Africa’s Coronavirus/ COVID-19 Situation Report or Update issued by the Department of Health RSA on 04 February 2022:

this is not a theory my brother but reality, i'm not friends with China neither do i fight with it.

on that matter, i'm actually saying the disease was manufactured by the CHINESE using that Intelligence as by that time till now its ONLY Chinese scientist that can use the programme the last time i checked

WHY DID CHINA DO THAT?
at that moment she was and is stilk fighting with the USA an ECONOMIC WAR, alas the thing quickly spread out of the lab b4 finally programmed on the boundaries to which it must affect or should i say the couldn't find a way to isolate its effectiveness towards a certain race

WHAT THEN WILL HAPPEN?
as we speak, the learned gentlemen are busy since the onset trying to,manufacture another virua that will consume the one in place but with some added properties of the parent virus that it may be able to save their intersts like ACTIVATE & DEACTIVATE

China is concentrating on VIROLOGY, N.Korea on BALLISTIC WEAPONS both these are weapons of mass distruction aimed to US, to bring her down and all those that ass-lick her

THIS IS THE TECHNOLOGY THAT WAS USED TO MANUFACTURE SARS-COV-2 /COVID-19.

to read more find this atticle