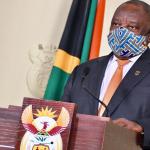 President Cyril Ramaphosa has told South Africans to brace themselves for a fourth wave of the Coronavirus at the backdrop of Omicron, a new variant detected recently.

The COCID-19 infection rate in various parts of South Africa is on the rise as scientists work hard to understand the new Omicron variant.

He also said there is a possibility of introducing mandatory vaccinations as vaccination has proved to be working to protect people. In a televised address on Sunday night, Ramaphosa urged South Africans to remain vigilant.

He said the national coronavirus command council had decided to keep the country at alert level one for now. This would be reviewed within a week. Ramaphosa added:

This should not come as a surprise. Epidemiologists and disease modellers have told us that we should expect a fourth wave of infections in early December.

Scientists have also told us to expect the emergence of new variants. There are several concerns about the Omicron variant, and we are not sure how it will behave.

We now know that Omicron has far more mutations than any previous variant.

We have … been undertaking engagements with social partners and other stakeholders on introducing measures that make vaccination a condition for access to workplaces, public events, public transport and public establishments.

Government has set up a task team that will undertake broad consultations on making vaccination mandatory for specific activities and locations.

He also urged countries that had placed travel restrictions on South Africa to reconsider their “irrational and premature” decision because the country already had measures in place to control and curb the spread of the virus.

The UK became the first country to impose a travel ban on South Africa. Israel, the US, Japan, France, the Seychelles and countries in the European Union followed suit.

pakaipa they will force everyone to be vaccinated

What use are my rights if I'm forced to get vaccinated?