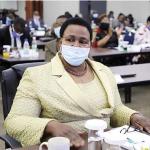 ZANU PF Secretary for Women’s Affairs, Mabel Chinomona, who is also Senate President, has castigated Manicaland Provincial Affairs minister Nokuthula Matsikenyere for snubbing her events in the province and accused her of gross incompetence and turning the Government complex into a gossip hub.

Matsikenyere was appointed Minister of State for Provincial Affairs and Devolution in charge of Manicaland Province on 8 February this year, taking over from the late national heroine Ellen Gwaradzimba.

Chinomona, who was the guest speaker during a women’s league outreach and skills training program for Manicaland’s Indigenous church held at Mutare Showgrounds on Friday, said:

President Mnangagwa responded very well to our plea as he appointed five female ministers. To my surprise, let me confess so God will have mercy on me.

I came here two or three months ago but I never saw the minister of state (Matsikenyere) in attendance, maybe it was because I was the one officiating the event.

Today it is the same thing, I didn’t see her again. I cannot understand. Is it that women who are gathered here are not important or maybe the guest speaker is the one who is not important?

This event should have been graced by those who represent the president in this province.

ZANU PF insiders from the province told NewZimbabwe.com that there is bad blood between Chinomona and Matsikenyere resulting from their alleged factional allegiances.

Matsikenyere reportedly belongs to a faction in the party aligned to Vice President Constantino Chiwenga, who is believed to be angling to nudge President Emmerson Mnangagwa out of power, allegations that he has denied.

THIS IS THE KIND OF NOISE COMING FROM ZANU PF QUARTERS. NOKUTHULA MATSIKENYERE AS PROVINCIAL AFFAIRS MINISTER MANICALAND, WAS SUPPOSED TO ATTEND MABEL CHINOMONA'S MEETING. MABEL CHINOMONA IS HER SENIOR IN BOTH ZANU PF STRUCTURES AND IN GOVERNMENT. IF SHE WAS COMMITTED SOMEWHERE SHE SHOULD HAVE SENT HER APOLOGIES.

SO FAR SO GOOD FOR OPPOSITION POLITICAL PARTIES, PARTICULARLY, MDC ALLIANCE. THE NOISE MUST CONTINUE UNTIL 2023. MOST SOCIAL MEDIA PLATFORMS ALLEGE THAT FACTIONALISM SIMMERING IN ZANU PF STARTS FROM THE TOP. BUT THREE WEEKS AGO VICE PRESIDENT CHIWENGA COMMITTED HIS SOLID AND UNSHAKABLE ALLEGIANCE TO PRESIDENT ED MNANGAGWA. BUT THEY SAY THERE IS NO SMOKE WHERE THERE IS NO FIRE.