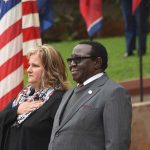 The government has said preparations for the burial of the late national hero Ambassador Simon Khaya Moyo who succumbed to cancer last Sunday are now at an advanced stage.

He will be interred at the National Heroes Acre in Harare on Monday.

President Emmerson Mnangagwa is expected to preside over the burial of the late national hero.

ZBC News reports that buses have been deployed to ferry people from various provinces with only a limited number of people with COVID-19 negative certificates allowed at the venue.

On Saturday, the body of the late Ambassador Khaya Moyo is expected to be flown from Bulawayo to Harare where it will lie in state at the One Commando Barracks.

All is now in place for the burial of Cde Simon Khaya Moyo. President Emmerson Mnangagwa will preside over the burial. Unlike before our programme starts early. We expect the body of the late to be in Harare on Saturday where it will lie in state.

Ambassador Khaya Moyo, who was the ZANU PF spokesperson, died on Sunday at Mater dei Hospital in Bulawayo after a long battle with cancer.