Six Nations 2022: Who should start in England's backline against Scotland? 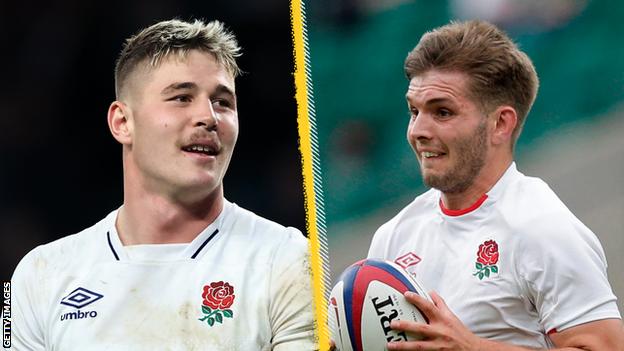 The oldest fixture in Test rugby might well feature some of its newest faces.

England coach Eddie Jones is without a host of his familiar backline mainstays.

As he pushes England into a more adventurous, attacking era will he use Saturday's meeting with Scotland as a chance to further his revolution?

Or, in front of a raucous Murrayfield, against a confident opposition, with a dismal fifth-place finish to improve on from last season, will he fall back on familiar options and established patterns?

Your chance to vote for your preferred line-up is below.

Centre is perhaps where Eddie Jones' greatest conundrum lies and so is a good place to start.

Inside centre in particular has long been a problem position for England.

Jones' search for the right midfield blend has seen him lean on the power of Manu Tuilagi or the play-making ability of Owen Farrell. However, injury means neither is available this time around.

Gloucester's Mark Atkinson may be the man to profit from others' misfortune. The 31-year-old was a late arrival to international rugby when he made his England debut in November but at 6ft 6in and around 17 stone he offers a powerful and reliable option at 12.

Joe Marchant could be released from isolation on Thursday if he has returned two negative Covid-19 tests by then but the Quins back, who can play centre or wing, would have missed a substantial amount of training.

The experienced Henry Slade seems likely to start at outside centre, while Elliot Daly is also an option and Exeter's Jack Nowell, more normally a wing, has ambitions to move into midfield.

He was given a run-out at outside centre in the win over Japan in November 2018, but the experiment has not been repeated since.

England's scrum-half options seem particularly bountiful this Six Nations and Eddie Jones must decide whether to take a risk for a potentially exciting reward or stick with experience.

Ben Youngs is by far the most capped player in England's squad with 112 and has faced the adversity of Murrayfield many times over the last decade without once losing at the ground.

The 32-year-old offers a calm head which could be crucial after losing the experience of Farrell, but there are young pretenders snapping at his heels.

After missing the autumn through injury, Bristol's Harry Randall has been retained for the weekend and offers an increased pace of play and a sniping threat around the fringe.

Randall, who has two England caps, has made seven clean breaks in the Premiership this season, more than any other scrum-half.

Again, Jones must decide whether he wants a fly-half with experience of the vocal Murrayfield crowd or one who might offer something new to England's attack.

The England head coach had originally wanted to start Harlequin Marcus Smith at fly-half, with Farrell at 12 to "help run the game".

But Farrell's injury meant Leicester's George Ford was thrown an England lifeline after being left out of the squad in the autumn.

Ford has been in impressive form for Premiership table-toppers Leicester, while Smith showed he can back up his creativity with the nerve to see out big Tests with his game-winning penalty against South Africa in November.

Curveballs include Saracens' Max Malins who more usually plays either wing or full-back, and Northampton's George Furbank, who has played both at 15 and 10 in his five England caps to date.

Jonny May and Anthony Watson are the notable absentees here, with both ruled out of the entire Six Nations because of injury.

Nowell has been called back into the squad having not played for England since the 2019 World Cup and since returning from injury has been constantly improving with Exeter.

Versatile Malins is a valuable option and is actually one of the more experienced options in the injury-hit crop of wingers with 10 caps to his name.

Marchant was initially deployed as a wing in November's win over South Africa, although he shifted into a more familiar centre role after an early injury to Tuilagi.

Daly started at centre for the British and Irish Lions in the first Test against South Africa in the summer, although Jones has preferred him as part of a back three.

London Irish's powerful Ollie Hassell-Collins is uncapped but has made more metres than any other wing in the Premiership this season.

Leicester full-back Freddie Steward emerged as one of England's stars of the autumn, looking entirely unfazed by international rugby with a cool head under the high ball and exciting attacking ability.

A late call-up to the Six Nations squad, 52-cap Daly could return at 15, while Furbank and Malins are other options for Jones.