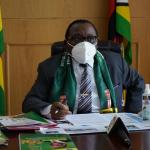 The late former ZANU PF secretary for information and publicity, Simon Khaya Moyo, has been declared a national hero.

However, burial arrangements are yet to be publicised.

Moyo (76), succumbed to cancer on Sunday at Bulawayo’s Mater Dei Hospital after a long battle with the disease.

My brother Cde SK, I first met him in 1979 at Lancaster. At that time, he was the assistant to the late Vice President Joshua Nkomo. I don’t think he had any adult life outside the struggle.

From Makerere University, he joined the struggle on the ZAPU side and he has been with us throughout. He then progressed in the party structures in ZAPU.

Down the line, he was promoted to be a member of the Politburo, under former President Mugabe.

He has also held several positions in Government, first in the public service, as a civil servant and later as a minister.

So I don’t know of any of his life outside politics, outside the revolution and outside serving the country, or in the public sector.

We have indeed lost a committed, articulate Cde among us, and we feel poorer.