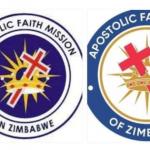 Divisions in the Apostolic Faith Mission (AFM) in Zimbabwe church took an ugly twist on Thursday night when security guards hired by one of the factions fired gunshots at the church’s premises in Marlborough.

He said security guards hired by the church’s splinter group led by Reverend Cossam Chiangwa fired gunshots at the Reverend Amon Dubie Madawo-led group in a bid to take over the house of worship by force.

This was despite a Supreme Court judgement which ruled against Reverend Chiangwa, in favour of Reverend Madawo, whom the courts recognise as the legitimate leader of the church.

An attempt by Chiangwa’s security men to take over control of the premises in the dead-of-night were thwarted by security guards aligned to Madawo, resulting in the shooting.

Asst Comm Nyathi said representatives of both church factions had made counter-reports to the police. He said:

The Chiangwa security guards tried to enter the premises and they were dispersed by dogs.

After that, the Chiangwa faction’s security guards phoned their command section which deployed reinforcements. One of these reinforcements fired the shots.

The case of assault was reported to Marlborough Police Station by the Chiangwa guards and the Madawo faction’s security guards also made a counter-report of the shooting.

This is the case the police are investigating and all is emanating from the church fights.

The battle to control AFM started in 2018 and has played out in the public for the past three years.

It resulted in the emergence of two rival camps, one led by Madawo and the other by Chiangwa.

The dispute between the two camps spilt into the Supreme Court after a group led by Chiangwa filed an appeal against a High Court order which gave Madawo’s faction blessings to lead the church.

The row over control of the church and its assets was sparked by the church’s council meeting held at Rufaro, Masvingo in 2018.

The meeting, as part of its resolutions, passed a vote of no confidence on the president of the church Reverend Aspher Madziyire.

The results of the council meeting saw leaders of both factions taking the matter to court.

US$0 Harare
Dury 6 months ago

Did you know Africans are the only ones who can buy a Factory ,convert it into a Church and then start praying for Jobs

Christianity is a bogus religion brought by whites to brainwash and colonise world religions. Thats why you witness a serious lack of discipline in their churches and congregants alike. Everything they do is mared by fornication, adultery, fraud, hatred and misdirection. Even the Israelites themselves are not christians.

ZAOGA is next in line

Hapasisina kunamata Mwari, it is now a battle field, a boxing ring, not praying the Almighty but the devil by disguise.