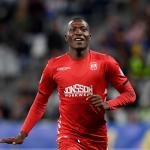 Ndoro (36), who is back in Zimbabwe, has been training with Northern Region Division One Simba Bhora owned by a relative Simba Ndoro.

Ndoro has played in South Africa and the Middle East but is back home due to ill health and is not well enough to start training.

Speaking to The Herald, Simba Ndoro said they have not yet reached any agreement with Tendai as he was not feeling well. He said:

I am related to Tendai, we are both Ndoros, so he is with the team, as he continues to recover from an ailment.

He is with us but we have not reached any agreement, as far as his joining us, is concerned.

Tendai is in camp as I felt he needed a place where he could recuperate as he has not been feeling well of late.

In camp, he can have peace of mind and, as a team, we also have a team doctor, who is helping assess him.

The team have, however, not ruled out bringing him on board, if his condition improves. Added Ndoro:

Tendai is an experienced player, who when fully fit, every team will want him on board, so we can’t rule out chances of having him, on our books.

He has a lot of experience and, if he has fully recovered, we will start from there but, right now, we are just assisting him, as one of us.

“Fire 7” as Tendai Ndoro was known, played for a number of PSL teams during his stay in South Africa, including Orlando Pirates (60 matches), Cape Town City FC (43), Highlands Park (28) and Ajax Cape Town (8).

He scored 23 goals in all competitions for Orlando Pirates between 2015 and 2017.

His last PSL match was for Highlands Park against Kaizer Chiefs in January 2020 before he officially left the club in May last year.

More: The South African; The Herald

We've not forgetten how you ill treated your wife.This guy was very wicked when he had his fame and fortune.Hero to Zero.

From hero to zero dzungu