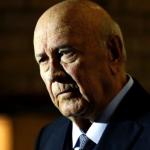 The Black People’s National Crisis Committee said on Friday it plans to slaughter a sheep to “celebrate” the death of FW de Klerk at a ceremony in Khayelitsha, Cape Town.

An organiser, Phurah Jack, told News24 the ceremony will be to mark De Klerk’s death and to ask ancestors to make sure De Klerk meets the spirit of Steve Biko wherever he goes.

Biko, a leader of the Black Consciousness movement, died on 12 September 1977 in police custody after being severely beaten by police and suffering a traumatic brain injury.

At the time, De Klerk would have been in the apartheid government’s Cabinet which was restricted to white people.

A poster with horns drawn on a picture of De Klerk advised attendees to “bring your own booze” to the slaughtering ceremony.

Instead of people descending to console the bereaved, De Klerk’s death was marked by arms-length commentary and the release of anger on social media.

Since De Klerk died of mesothelioma cancer at the age of 85 on Thursday, the debate has raged about his legacy, and whether his posthumously released apology would ever be enough to erase the pain caused by apartheid before he made the “conversion” he spoke about in the video.

The De Klerk foundation has not yet made announcements regarding his funeral.

What's the point behind celebrating his death when he died peacefully and with loads of money? It doesn't make sense