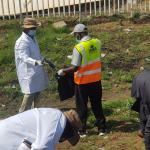 Transport and Infrastructure Development Minister Felix Mhona said the Shamva Tollgate is set to be relocated as the current site is now in a residential area and can no longer cope with the vehicular traffic on the route.

The Minister also called on motorists whose vehicles do not have number plates to acquire them as are there are enough in stock. Said Mhona:

Today I joined officials from ZINARA, CMED, VID and TSCZ in a cleanup campaign at Shamva Tollgate.

I also interacted with motorists to understand their challenges at Tollgates and urged those without number plates to acquire since we now have enough in stock.

During the same visit, I also toured the new site where we intend to relocate the Shamva Tollgate with more lanes.

The current site is now in a residential area and can no longer cope with the vehicular traffic on that route.

Mhona, however, did not reveal when the relocation will be done or where the new tollgate will be situated.