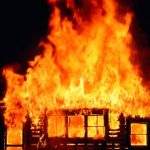 Drugs worth thousands of dollars including over two thousand COVID-19 doses have been destroyed after Shamva District Hospital was gutted by fire this Tuesday.

ZBC News arrived at the scene and witnessed the fire brigade putting out the fire, which is suspected to have begun at around three am.

Shamva District Development Coordinator, Mr White Nkoma described the incident as a loss to the entire district since the hospital serves as a referral centre for 18 health centres covering a population of 123 000 people.

Earlier this year, 39 health workers and their families were left homeless after a massive fire destroyed their living quarters at Mpilo Central Hospital.

The estimated cost of damage to property as a result of the inferno at Mpilo was estimated at US$ 500 000.00.

The institution had also suffered another setback in 2018 after a fire broke out at the doctors’ quarters and destroyed properties worth thousands of dollars.

In June this year, a fire destroyed staff quarters at Kwekwe General Hospital on Tuesday morning, leaving nine families including doctors, physiotherapists, nurses and an administrator without accommodation.

The causes of the fire in these incidents are still unknown but some suspect electrical fault.