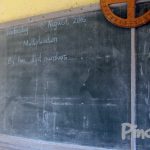 The letter written through Ngugama’s lawyers Matutu Mureri Legal Practitioners was submitted to Mhike after the DSI Ronald Muganhu refused to receive it last week.

Mhike, however, told The Mirror that she had not received the letter from Ngugama’s lawyers.

Meanwhile, Mureri said they gave Mhike a 48-hour ultimatum to respond to the letter. He added that the ultimatum had lapsed and the matter was now going to be taken to the Minister of Primary and Secondary Education Evelyn Ndlovu.

Ngugama and his school head Progress Matongo were last week summoned by Muganhu for a meeting at his offices.

Muganhu reportedly said Ngugama was a security threat and needed to transfer from Serima and Gutu West Constituency before schools opened for the first term.

He is also alleged to have informed the bewildered teacher that his transfer was not open for discussion.

Ngugama’s lawyers gave Muganhu 48 hours to explain why he was labelling a mere school teacher, a security threat or face legal action.

They warned Muganhu that the transfer he sought against Ngugama was illegal and therefore null and void.

Do that 5 months ago