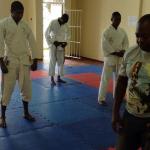 I’m very humbled and excited for the opportunity presented to me of leading such an important organ in our Karate sport of Africa.

It’s an honour to be trusted with such responsibility and it shows how confident they are in my capabilities to lead the sport forward.

I’m very positive that I will be able, together with the team elected to address issues affecting our sports in Africa, Zimbabwe Karate will benefit a lot as it will be involved in the leadership apex of the region.

As as country we need to make full use of this opportunity to develop the sport.

Rugwete who takes over from Million Masumbika of Botswana was the federation’s secretary-general.

He will lead an eight-member federation — Angola, Botswana, Namibia, South Africa, Zambia, Mozambique, Malawi, and Zimbabwe for the next four years.