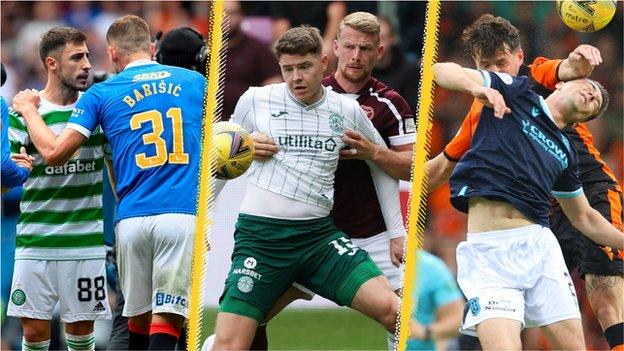 Having grabbed the world's attention with superstar Wales midfielder Aaron Ramsey's move to Rangers in a breathtaking climax to transfer deadline day, attention turns to which Scottish Premiership derby protagonists will be celebrating a belated happy new year.

The stakes as the city rivals in Glasgow, Edinburgh and Dundee prepare to do midweek battle have risen considerably since this round of fixtures was originally scheduled for 2 January.

Postponed because of Covid-19 attendance restrictions, five games on Tuesday, followed by the Old Firm meeting on Wednesday, are poised to provide returning fans with a nerve-shredding treat.

Here is what is in store...

There is no such thing as a meaningless Old Firm derby, but this one could be the most significant in many a year.

After beating St Mirren 2-0 on Boxing Day in what was the final game before the Premiership's winter break was brought forward, Rangers manager Giovanni van Bronckhorst said his reigning champions were "in the place they want to be".

However, the six-point gap on Celtic has since been whittled down to two and Ange Postecoglou's side could take over at the top of the table for the first time since August should they beat the visitors from across the city on Wednesday.

Both sides are unbeaten in 13 games, but Rangers' draws away to Aberdeen and Ross County have swung the momentum towards the city's east end in a way that has surprised the soothsayers that surfaced after Celtic's inconsistent start to the Australian's reign last summer.

That was no more evident than on Saturday when County, thanks in part to two uncharacteristic goalkeeping errors from 'Mr Reliable', Allan McGregor, scored an added-time equaliser before Celtic broke Dundee United's resistance with a late goal of their own.

Rangers' vulnerability in that 3-3 draw was not a one-off and was also evident as they struggled to a 1-0 win at home to Livingston in midweek.

It would be a brave man to drop Rangers legend McGregor two days after his 40th birthday, even given back-up Jon McLaughlin signed a contract extension on Sunday, and it is at the other end of the park where Van Bronckhorst has most thinking to do.

Cedric Itten has looked like a player just recalled from a torrid time at the foot of the Bundesliga with Greuther Furth as the Dutch manager tries to compensate for Alfredo Morelos' absence with Colombia.

Celtic are also missing their main striker, with Kyogo Furuhashi injured and recently signed Daizen Maeda on Japan duty. And their central midfield has been decimated with Tom Rogic away with Australia, captain Callum McGregor sidelined and now Nir Bitton suspended after Saturday's red card.

So far, though, Celtic have looked more able to delve deep into the depths of their squad and continue to produce free-flowing football.

Which is no doubt part of the reason Rangers dug into their reserves to bring in two eye-catching loanees - £19m winger Amad Diallo from Manchester United and Ramsey from Juventus.

Rangers are unbeaten in seven derbies since December 2019, winning the latest three, and have not lost in their latest three visits to Celtic Park, winning twice.

This time, though, Celtic have reeled off five straight wins since their own stumbling draw with St Mirren and Van Bronckhorst will be hoping that his late flurry into the transfer market is enough to protect his unbeaten start as Rangers boss.

Up in Tayside, the city neighbours are preparing for their most crucial derby since Dundee beat United to relegate the Tannadice club from the top flight in May 2016.

At first glance, not much has changed since Dundee lost in Aberdeen and United at home to Hibs on Boxing Day.

United remain seventh and Dundee second bottom, two points above St Johnstone, but the Dark Blues are now five behind Ross County instead of two and pressure is mounting on manager James McPake.

A potential crisis was averted with last midweek's 0-0 draw with St Johnstone in Perth, although it could be argued they missed a chance to finish off wounded prey.

That, following on from an unconvincing Scottish Cup win against League One strugglers Dumbarton, at least ended a run of six straight defeats.

Thomas Courts' United have also recovered from six consecutive losses - with a cup win over Kilmarnock and three league points against County - before being denied a battling draw at Celtic Park by a late Liel Abada strike on Saturday.

They will stroll across Tannadice Street to Dens Park with heads held higher, looking to protect a four-game unbeaten run in Dundee derbies and go some way to paying back their rivals for that painful relegation loss eight years ago.

Hearts to complete shift in power?

The balance of power has shifted most in Edinburgh, where newly promoted Hearts have usurped a Hibs side who finished last season on a high of third place and European qualification under Jack Ross.

So much so that the Easter Road side head into the second Edinburgh derby of the season under a different manager than when they drew 0-0 at Tynecastle in September.

The optimism from Shaun Maloney's opening two victories in charge has been followed by creeping doubts after four outings during which their only win came deep into extra time against League One leaders Cove Rangers in the Scottish Cup.

Maloney has yet to find a replacement in terms of goalscoring or cutting edge after the sale of Australia winger Martin Boyle to Al-Faisaly and Hibs sit in fifth place, 12 points adrift of Tuesday's third-top visitors.

With Northern Ireland striker Liam Boyce back from injury, and having managed to hold on to Rangers-bound Scotland centre-half John Souttar until the summer, Hearts have been grinding out results again and their only defeats in 10 outings have come to Celtic (twice) and Rangers.

They head to Leith unbeaten in three derbies - and in four visits to Easter Road, winning three of them, including the latest two. Indeed, the home side has failed to win any of the last eight league meetings between the sides and a continuation of that trend must surely just about sew up third spot for Robbie Neilson's men in maroon.