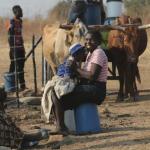 World Health Organisation (WHO) data show that coronavirus infections in Africa have been dropping since July despite fears when COVID-19 first emerged last year that the pandemic would sweep across Africa, killing millions.

Although it’s still unclear what COVID-19’s ultimate toll will be, that catastrophic scenario has yet to materialise in Zimbabwe or much of the continent.

But there is something “mysterious” going on in Africa that is puzzling scientists, said Wafaa El-Sadr, chair of global health at Columbia University. She said:

Africa doesn’t have the vaccines and the resources to fight COVID-19 that they have in Europe and the US, but somehow they seem to be doing better.

Some researchers say the continent’s younger population – the average age is 20 versus about 43 in Western Europe — in addition to their lower rates of urbanisation and tendency to spend time outdoors, may have spared it the more lethal effects of the virus so far.

Several studies are probing whether there might be other explanations, including genetic reasons or past infection with parasitic diseases.

On Friday, researchers working in Uganda said they found COVID-19 patients with high rates of exposure to malaria were less likely to suffer severe disease or death than people with little history of the disease.

Jane Achan, a senior research advisor at the Malaria Consortium and a co-author of the study said:

We went into this project thinking we would see a higher rate of negative outcomes in people with a history of malaria infections because that’s what was seen in patients co-infected with malaria and Ebola.

We were actually quite surprised to see the opposite — that malaria may have a protective effect.

Achan said this may suggest that past infection with malaria could “blunt” the tendency of people’s immune systems to go into overdrive when they are infected with COVID-19.

The research was presented on Friday at a meeting of the American Society of Tropical Medicine and Hygiene.

Christian Happi, director of the African Center of Excellence for Genomics of Infectious Diseases at Redeemer’s University in Nigeria, said authorities are used to curbing outbreaks even without vaccines and credited the extensive networks of community health workers.

Devi Sridhar, chair of global public health at the University of Edinburgh, said African leaders haven’t gotten the credit they deserve for acting quickly, citing Mali’s decision to close its borders before COVID-19 even arrived.

Oyewale Tomori, a Nigerian virologist who sits on several WHO advisory groups, suggested Africa might not even need as many vaccines as the West.

It’s an idea that, while controversial, he says is being seriously discussed among African scientists — and is reminiscent of the proposal British officials made last March to let COVID-19 freely infect the population to build up immunity.

Hmmmmm i don't believe any of this,Africa has no adequate equipment and therefore the data will never be correct.Lets not pride ourselves and boast of being whatever,many people succumbed of this covid and it was never recorded.

How many of us where tasted this Covid 19?Very few.

How many households didn't suffer terrible coughs and the infleunza this year?Many ,many and few where tasted

How many boader jumpers sneaked in back home with Covid or dead in coffins?Many and they where not recorded.

We were told to stay home when infected,imagine in Rural areas when one dies and buried after 24 hours,,no postmoterm.No data totally.

These scientists are taking reports from biased Organisations,imagine the ZBC with its state controlled media which is likened to a sleeping security guard who would often wake up and jot in the O.B ,"All in order,no bad report.The site is safe and undercontrol.

So there will never be a correct data in Africa!!!!

Corona was more than 2000 daily...even without much technology, when such number is dying in Zim can't you tell?

🙄I think these guys got something to do with the creation of the virus ,like ebola they wanted to wipe away every breathing soul in Africa and vacate themselves since they are over populated in their continents ...but Africa is a blessed continent we are thus protected by our God. Our climatic conditions create immunity on its own think of how our warm African climate saves J. Rhodes

LADIES AND GENTLEMEN, I DO NOT KNOW HERE, WHO HAS JOINED WHO HERE ? [NDIRI KUTI INI, NDIYANIKO APA AZOBATANA NEMUMWE ?]. BEFORE THE PUBLICATION OF THIS ARTICLE WHICH SAYS SCIENTISTS ARE AT LOSS AS TO HOW THE CURRENT PANDEMIC HAS HAS NOT RAVAGED AFRICA AS IT HAS DONE WITH EUROPE AND THE AMERICANS, I WAS ALSO ASKING MYSELF THE SAME QUESTION.

I THINK AFRICANS REACTED DIFFERENTLY TO THE PANDEMIC FROM THE EUROPEANS, AMERICANS AND THE LATIN AMERICANS. AFRICANS FOLLOWED RELIGIOUSLY RECOMMENDATIONS FROM WORLD HEALTH ORGANISATION, [WHO]. SO DID THE CHINESE.

THE AMERICANS AND THE EUROPEANS, ESPECIALLY THE AMERICANS, POLITICISED THE PANDEMIC. THE FORMER UNITED STATES OF AMERICA PRESIDENT, DONALD TRUMP, ACTUALLY AND MOCKINGLY CALLED THE PANDEMIC THE [CHINESE VIRUS]. HE DISCOURAGED HIS PEOPLE FROM WEARING FACE MASKS AND PRACTISING SOCIAL DISTANCING. HE WAS PREACHING A DIFFERENT TUNE FROM HIS HEALTH ADVISOR, DOCTOR FAUCHI WHO WAS DISTANCING HIMSELF FROM THE FORMER PRESIDENT.

I AM NOT A FUNDI IN HEALTH ISSUES, BUT ANOTHER FACTOR WHICH I THINK IS HELPING AFRICANS IS THAT IN AFRICA WE ARE SPARSELY POPULATED THAN EUROPEANS AND THE AMERICANS. IN AFRICA MAJORITY LIVE SPARSELY IN RURAL AREAS AND A FEW IN CITIES AND TOWNS. THEREFORE SOCIAL DISTANCING IS NOT A PROBLEM FOR AFRICANS. IN EUROPE AND AMERICA ABOUT THREE QUARTERS OF THE POPULATION LIVE IN CITIES AND TOWNS WHERE THEY ARE CONGESTED IN STREETS, FLATS AND ENTERTAINMENT VENUES. JUST WATCH HOW THEY FILL UP THEIR SOCCER STADIA !!!!!

THE SCIENTISTS MUST NOT TIRE. THEY MUST CARRY OUT RESEARCHES IN CLIMATE, GENES, TYPE OF FOOD AND MANY MORE.

I WILL NOT HAVE DONE JUSTICE TO THE OPPRESSED IF I FAIL TO MENTION THAT SOME LEADERS IN AFRICA HAVE TAKEN ADVANTAGE OF WHO PROTOCOLS TO OPPRES OPPOSITION POLITICAL PARTIES IN THE RESPECTIVE COUNTRIES. THEY HAVE SUSPENDED DUE ELECTIONS. THEY HAVE ARRESTED OPPOSITION SUPPORTERS FOR HOLDING IN DOOR MEETINGS. YET THEY CONVENED RALLIES WHICH ARE ATTENDED BY THOUSANDS OF PEOPLE. THEY HAVE ORGANISED HOOLIGANS TO INFRINGE THE FREE MOVEMENT OF OPPOSITION LEADERS IN COMMUNAL LANDS BY BLOCKING OR BARRICADING ROADS.

"scientists mystified"......kkkk....you were waiting for a bloodbath in Africa?!

Of course that's exactly what they were expecting. Early last year some European scientists asked why is it the virus not killing Africans... After a few months we started losing some of our loved ones. as for me i think these guys have something to do with this pandemic, a normal human being should have glorified the Almighty for sparing our continent