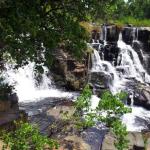 A 17-year-old Lower Sixth pupil at First Choice Academy in Harare drowned in Nyangombe River in Nyanga during a recent sightseeing tour.

Prince Matiza from Waterfalls, Harare, was part of 100 pupils and six teachers who had travelled from the capital on a tour of the picturesque Nyanga tourism facilities, among them, the Nyangombe Falls.

Efforts by one of the teachers, Elijah Matanhire (34) to rescue Matiza proved fruitless as he had lost consciousness and later died.

Matiza reportedly sneaked from the chalets where they were camped and went to the falls without notifying either ZimParks authorities or any of the teachers about the swimming expedition. Said a Zimparks official:

It was a sad and unfortunate development. This has never happened before. We usually accompany guests on their tour of the falls, but we learnt that the pupil sneaked from the camp, and proceeded to the falls where drowned while swimming.

We can confirm the death of Prince Matiza, a Lower Sixth pupil at First Choice Academy in Harare.

Prince was among 100 pupils and six teachers who had gone to Nyanga on a school trip.

Matiza sneaked from their camp and went to the falls without notifying the ZimParks team.

He drowned, and a teacher, Elijah Matanhire (34) was one of the first people to attend the scene.

Matanhire searched for Matiza’s body and retrieved it. He was unconscious and died upon admission at Nyanga District Hospital.

He appealed to people to be cautious when playing near water bodies.

US$8.00 Chitungwiza
Chief Justice 6 months ago

Something not adding up. If he indeed sneaked out the search party could have started somewhere else not the people.
Means someone saw him drowning and failed to rescue him.

Something not adding from the story.
The boy sneaked out . It means not one knew where boy went. And failed rescue mission means someone saw him drowning and tried to rescue. If he indeed sneaked out it could have taken time to search other places other than the pool