School Heads To Get Allowances Based On School Grade - Government 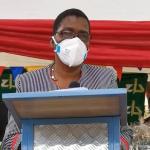 The Permanent Secretary in the Ministry of Education, Mrs Tumisang Thabela, has said school heads will get allowances that will be determined by the grade of their schools.

The ranks will be determined by the number of learners at the school.

She made the remarks on the sidelines of a ceremony to award Gloag High School of Bubi District, Matabeleland North with the Secretary’s Bell Award for 2018. Mrs Tumisang Thabela said:

What has happened is that schools are now classified according to their size. So, we now have what we call a Grade

One or large school which will be headed by somebody who we will call a Head One, deputised by two deputies because it’s a mega school which attracts a second deputy head. This is for 2 000 learners and more. The head will get an allowance of 25 per cent of their basic salary for heading that school.

Then the school that is in Grade Two will have between 800 and 1 999 learners. It will be headed by a Head Grade Two and a one deputy head. They will get 20 per cent of their basic salary as an allowance. Then the small school, which has been 141 and 799 learners.

Those ones will get 15 per cent of their basic salary. So, in this case, it is the school that is graded and not the head. The head takes the grade of the school and should they move to a lower graded school, they don’t carry their grade..

This happens at the backdrop of teachers’ displeasure over poor salaries. They have in the past two years embarked on periodic protests to compel the government to restore their 2018 salaries that were over US$500 on average.

We do not dispute the fact that heads need to be rewarded for their work but the question is whether their suboordinates are motivated also. In our case the ordinary teacher is suffering and rewarding the head only is seen as a form of divide and rule tactic. The teacher's welfare also needs to be seriously considered as they are the ones dealing directly with learners and neglecting them results in neglet of the learner as well.

Please read article and understand before commenting,they are not refering to academic grades in this article.

That's true you say. The government should also consider kuti it's not only school acadedmic grades which measures the performance. For example, look at sporting activities.
Some have won themselves scholarships to study ocerseas beacause of their ability to play sport,not because they were getting good grades.