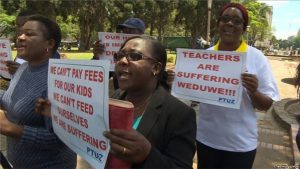 This comes after teachers’ unions in Zimbabwe issued individual and collective statements indicating their members will only report to work when the government has addressed their grievances.

Teachers have been at loggerheads with the government in the past two years over the erosion of their salaries. They want the government to restore their 2018 salaries when they earned around US$500.

They are currently getting an equivalent of just above US$100 in Zimbabwe dollars.

In a letter dated February 3, 2022, Zimbabwe National Union of School Heads (ZINUSH) secretary-general, Munyaradzi Majoni informed the government that they won’t be able to repeat for duty due to incapacitation. Reads the letter:

Reports coming from our members in the ten provinces clearly show that they headmasters are largely incapacitated to go to work apart from the fact that they are failing to raise fees for their own children.

We are convinced that our members can only be capacitated if our salaries are restored to previous levels and in actual United States dollar terms.

Last year, the government introduced grade-based allowances for school heads, a move that was described by teacher unions as a tactic to appease school heads.

Workers unions urged schools heads to reject the token allowances and instead join other teachers in demanding the restoration of their salaries.

The government which has often said it is committed to addressing workers’ grievances says increasing workers’ salaries unsustainably can come back to haunt the nation.

It has instead introduced a cocktail of nonmonetary allowances and benefits to cushion its workforce from the bumps of life.

US$0 Harare
regret 3 months ago

what's the use of paying fees

these animals we call teachers are gradually becoming wild hant..!

If teachers are animals why do you trust animals to teach your kids. I think you are becoming an animal too.