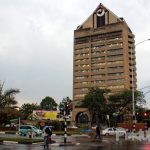 It is alleged that the Mutasa Zanu PF induction training was held on Saturday and Sunday, and was facilitated by party provincial officials, members of the Zimbabwe National Liberation War Veterans Association (ZNLWVA), and army personnel.

National Association of School Heads (NASH) secretary-general Munyaradzi Majoni said that it was a possibility that the meetings are being conducted.

These trainings are ongoing nationwide. The Constitution of the Republic proscribes civil servants from engaging in partisan business. Our ruling party is once again wantonly violating the Constitution it is expected to uphold.

Learners are being denied full access to education as school heads are leaving schools unattended. ZANU PF should be ashamed of itself; the preoccupation with power retention by any means necessary is pathetic.

Progressive Teachers Union of Zimbabwe (PTUZ) president Takavafira Zhou said the Zanu PF indoctrination lessons were not happening in Mutasa only. He said:

It is unfortunate that we are witnessing the “party-nisation” of government institutions, particularly the Ministry of Education. The reality is that there is a militarisation of the Education Ministry with the whole essence of ensuring that personnel within the ministry are ZANU-nised.

Mutasa Central MDC Alliance legislator Trevor Saruwaka confirmed that the induction meetings took place in his constituency. He added that the meetings are in violation of sections 200 and 208 of the Constitution.

The provisions bar civil servants from engaging in party politics and furthering the interests or cause of any particular party.

Zanu PF information director Tafadzwa Mugwadi told NewsDay that there was “nothing amiss with ZANU PF engaging the school heads if ever there was such a meeting in Mutasa.”

He added that ZANU PF’s membership cuts across headmasters, the nursing profession and other civil servants.

It should be a force matter

It should not be a force matter

US$4.00 Harare
Baba chanana 6 months ago