School Closed As Murdered Body Is Found In Schoolyard 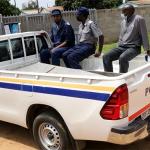 Intunta Primary School in Bulawayo’s Sizinda suburb was temporarily closed after a half-naked dead body was discovered in the schoolyard.

The body of Musawakhe Nceku Mthunzi (21), was spotted by the two Grade Five learners at around 7 AM.

It had bruises and deep cuts, raising suspicions that the deceased could have been killed and dumped in the schoolyard.

Musawakhe’s father, Japhet Mthunzi, travelled from his rural home in Matobo in Matabeleland South and managed to positively identify his son. The body was later ferried to the United Bulawayo Hospital (UBH) mortuary.

He said a post-mortem report says Musawakhe was hit several times on the head and that caused bleeding in the brain, likely causing his death.

Meanwhile, the Director of Communications and Advocacy in the Ministry of Primary and Secondary Education, Taungana Ndoro told Chronicle that lessons were only suspended on Monday but resumed on Tuesday. He said:

To provide learner support services in light of the traumatic experience they underwent.

They are given psychological services by our department Learner Welfare, Special Needs and Psychological Services Department.

We have got psychologists in the ministry who attend to those learners and provide learner support services.

It was just a suspension of lessons for that day and they are now back to school.

The same psychologists take time to address the learners at the school class by class.

They must have gone there and counselled the learners by now.

Umm this is sad 😭