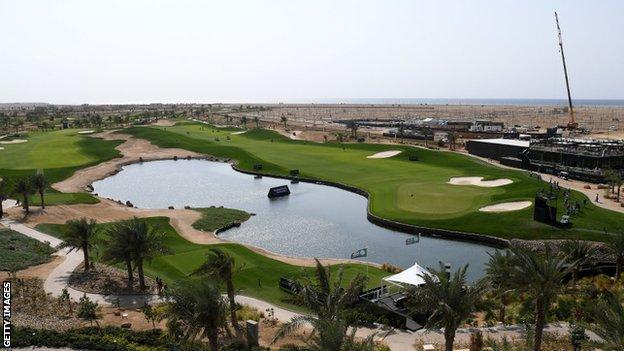 The Saudi Arabian-funded Asian Tour will stage its first event in England in June as it continues its expansion.

The Centurion Club in Hertfordshire is set to host the $2m (£1.5m) tournament from 9-12 June, one of 10 international events first unveiled in November 2021.

"We are on the threshold of a new era for the Asian Tour," said Asian Tour chief Cho Minn Thant.

The tour recently revealed it had been boosted by a $200m investment from the Saudi Arabia government's Private Investment Fund, the majority shareholder in LIV Golf Investments. That funding has been increased by a further $100m, a statement revealed.

"We are setting the Asian Tour up as a powerful new force on the world golf stage," added two-time major winner and former world number one Greg Norman, who is chief executive of LIV Golf Investments. He will hold a news conference on Tuesday to outline more details.

"In my 40 years as a professional golfer, I've seen many parts of the world that have benefitted tremendously from golf and its growth and development.

"We now have the opportunity to do that in the Asia Pacific region and the Middle East. I've never been so optimistic about the future of the sport."

The 10 new tournaments - dubbed the 'International Series' - have funding to be held in each of the next 10 years.

The first will be staged in Thailand, from 3-6 March, with the England leg - the first Asian Tour event to be held outside of the continent - following in June, the week before the US Open.

Other events will be held in South Korea, Vietnam and Indonesia before heading to the Middle East and culminating in China, Singapore, and Hong Kong.

"The International Series is a new upper-tier of elite events, the likes of which the region has not seen before, that will mark the start of a phenomenal period of growth for the Asian Tour," said Thant.

"It will add to the Asian Tour's backbone of established events to comprise a 25-event season. Each of the 10 events will be broadcast live across the globe, with plans to attract an international field of headline talent."

Golf is one of several sports used in Saudi Arabia's efforts to rebrand itself amid concern over its record on human rights, a process regarded in many quarters as 'sportswashing'.

This is the latest move in a power struggle that is gripping the sport, with fears that the Saudi investment could lead to a Super League in the men's game.

The fight has already begun with the PGA Tour in America and DP World Tour (formerly European Tour) forming a strategic alliance and warning players against joining any breakaway regime.

The PGA Tour's flagship event, The Players Championship, has also doubled its prize pot and threatened Ryder Cup sanctions in an effort to keep its members onside.

Scotland's Colin Montgomerie, who won the European Tour's Order of Merit a record eight times, told BBC Sport last week: "It's a shame it's come to this. We used to work well with the Asian Tour and now we are at loggerheads because of money.

"It's a problematic issue. It's that horrible, evil word, money. The mighty dollar ruling people's hearts and minds."

Northern Ireland's four-time major champion Rory McIlroy said in December that players were being used as "pawns" and while he made it clear he is not interested in playing in events backed by Saudi money, he added: "I think we are independent contractors and we should be able to play where we want to play."

This week's Saudi International - which had its first three editions on the DP World Tour but has switched to the Asian Tour to become its flagship event with a prize fund increased from $3.5m to $5m - will not be part of the International Series.

Organisers claim it will be the strongest international field assembled on the Asian Tour.

It has attracted more than 20 of the world's top players, including 2019 and 2021 champion Dustin Johnson, American major winners Bryson DeChambeau, Phil Mickelson and Bubba Watson, as well as Olympic champion Xander Schauffele.