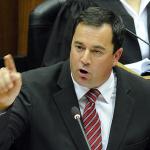 The leader of the Democratic Alliance (DA) party in South Africa, John Steenhuisen, has called on the country’s president, Cyril Ramaphosa, to end the curfew before New Year’s Eve.

In a statement posted on Steenhuisen’s Twitter page, the DA, which is the largest opposition party in South Africa, said that hospitalization rates are low across the country and the curfew could be dropped to allow South Africans to welcome the New Year. The statement read:

The DA calls on President Ramaphosa to end the curfew before New Year’s Eve.

Hospitalisation rates are low across the country. Omicron has proved to be far milder than past variants.

Meantime, vaccines have proven to be extremely effective at protecting against severe disease and death, so those in the high-risk group have had ample opportunity to opt for personal protection.

The real crisis now is the state of the economy and widespread suffering from loss of livelihoods.

The DA has never supported the curfew, as we have never found it to be a rational or justifiable denial of freedom.

But now more than ever, we believe it should be lifted once and for all, and before New Year’s Eve.

Ending the curfew is an easy and logical way to boost the economy, particularly the restaurant and events industry, which are major employers.

And not just the economy. National morale needs a boost too. People should be able to legally come together with friends and family to celebrate the start of 2022 and the end of an incredibly tough 2021. Most people aren’t observing curfew anyway.

This underscores the irrationality of the curfew, which is doing more harm than good by undermining the rule of law. Are the police going to arrest people celebrating New Year’s Eve?

Law enforcement should be focused on preventing drunk driving and real criminality, not curfew, so that law-abiding people can safely usher in the New Year.

This year, much of the suffering endured by the people of this country has been due to pointless, irrational, ill-considered policy, starting with beach bans. Let’s end 2021 and begin 2022 on a smarter, more positive note.

@talkmore
you are right these armed robbers i feel they are just grps of gangsters that actually have commanders in the background now authorites are hidding under the pretext of LOCKDOWN, CURFEW WHAT WHAT to be able to carry out yheir heignous operations.

pliz authorities may you end the menace of armed robbbers

Curfew is actually giving robbers a conjusive time and environment for their demonic operations. Since we had curfew in place see how many robberies. As if it was planned.