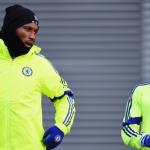 Salah netted his 104th goal as Liverpool won 5-0 against Watford. Sadio Mané scored first in the 9th minute before Roberto Firmino doubled the lead in the 37th minute.

Firmino extended the lead to 3-0 in the 52nd minute before Salah scored his two minutes later. Bobby sealed the victory with another goal at stoppage time.

Salah netted 32 goals in his first season at Liverpool after his move from Roma.

The Egyptian set a new benchmark for goals in a 38-game season, but also passed the 29-goal mark Drogba set for most goals by an African player in one campaign.

Speaking to the media in 2018, Salah said Drogba cheered him on as he set the new record. He told L’Equipe Magazine back then:

When I reached 20 goals, I spoke with Didier Drogba. He told me: ‘Please, break the record!’ to which I responded laughing: ‘No worries, I will!’

And I managed [it]. So I thought to myself, I have quite a few games to play before the end of the season, I can break the all-time record! It’s a great source of joy for me.