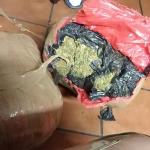 South African soldiers have seized illicit cigarettes and marijuana (mbanje) valued at over 1.4 million rands along the South Africa and Zimbabwe border.

The total value of all the confiscations was R1 477 228.00. Soldiers arrested one suspect who was handed over to the South African Police Service at Groblersbridge Port of Entry.

… In all incidents where cigarettes were confiscated, there were no arrests made.