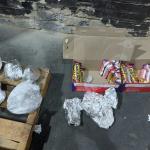 A 46-year-old man was arrested by the Hawks at OR Tambo International Airport after he was found in possession of six pieces of rhino horn stashed inside two boxes of chocolate hidden under the driver seat of his vehicle.

Members of the Hawks Serious Organised Crime Investigation team as well as officials from the Department of Forestry, Fisheries and the Environment were summoned to the crime scene when the security officer operating scanners at the airport alerted the relevant authorities upon detecting a suspicious parcel.

Upon examining the parcel, the team found six pieces of rhino horn inside two chocolates boxes of Lunch Bar.

A thorough investigation by the Hawks led to the arrest of the suspect and an undisclosed amount of money was found hidden under the driver seat of his vehicle.

The  man was expected to appear in the Kempton Park Magistrate’s Court on Tuesday for contravention of the National Environmental Management Biodiversity Act 10 of 2004.