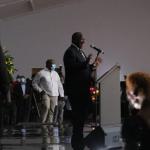 The South African Police Service (SAPS) is investigating the cause of a power outage at the ANC gala dinner held at the Protea Hotel Ranch Resort on Friday night.

Police Minister Bheki Cele confirmed that there was an interference with the electricity system at the Polokwane venue.

Just as President Cyril Ramaphosa was wrapping up his speech, the lights went off leaving ministers and business leaders who had paid hundreds of thousands of Rands to dine with ANC leaders embarrassed.

Responding to questions from the media, ANC treasurer-general Paul Mashatile ruled out load shedding, saying it could be a fault. He said:

Somebody did interfere with the plug that only deals with the lights in the hall.

The whole place had lights, even the speakers. This means that the plugs themselves were working.

While Mashatile declined to confirm that it was sabotage, he said police would be investigating.

As South Africa goes to the dogs, Zim starts STONE UPON STONE, BRICK UPON BRICK

I think South Africa have gone to the dogs.