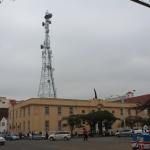 A woman from Bulawayo’s Magwegwe West suburb was on Thursday reportedly dragged out of a South Africa-bound by the bus crew after she fell sick.

Sithabile Maseko (49) was left battling for life in the street next to Regional Coaches bus rank around 4 PM just before the bus left for South Africa.

Two men agreed with the bus driver to drag Maseko out of the bus after she asked to get some fresh air as she wasn’t feeling well.

It is alleged that other passengers asked the woman what her problem was and she said she had a kidney ailment and was going to South Africa for treatment.

On realising that she had difficulties in breathing, the bus driver ordered two men to remove her from the bus.

They reportedly dropped her handbag and a plastic bag with her national ID, bus ticket and medical record but left with her suitcase in the boot of the bus.

Irate witnesses informed the bus company supervisors about the incident but were snubbed.

A Good Samaritan called an ambulance which came and took the woman to the United Bulawayo Hospitals.

The Good Samaritan, who now had the woman’s daughter’s contact numbers in South Africa, called her and informed her about her mother’s luggage that was in the bus travelling to South Africa.

That Satan Driver should perish in an accident

Shame how come vamwe vanhu vari this heartless. So did she get help?

We are now living in a heartless world with heartless people