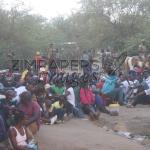 A South African cabinet minister has accused Zimbabwe’s security forces deployed at the Beitbridge Border Post of taking bribes to let undocumented immigrants into that country.

Home Affairs Minister Aaron Motsoaledi toured the border on Sunday where South Africa border security authorities told him that Zimbabwean soldiers were receiving bribes from border jumpers to allow them into the neighbouring country.

According to an eNCA report on Monday, an army officer told Motsoaledi that they had communicated with the Zimbabwean army commanders about the issue of corrupt soldiers but apparently nothing was done to address it. Said Motsoaledi:

These people come by car from Zimbabwe. The cars stop at the other side of the border. Whoever does not have documents will then move out of the car. The car will go because the driver would have all the documents.

But when they pass through the gate, they then wait for that person who crosses the border illegally on the other side.

That is why we have put several (roadblocks) after the border.

He also said the South African government had established a Border Management Authority to deal with illegal immigration.

Meanwhile, in a statement on Monday, the Zimbabwe Republic Police (ZRP) said on Sunday they arrested 781 people for border jumping as well as other related border crimes.

When contacted for comment by NewsDay, Zimbabwe’s Home Affairs Minister Kazembe Kazembe reportedly said that he was too busy to comment on the issue.

He, however, had not responded to the questions by Monday night.

The urgly head of corruption within the ranks and file of our security forces raises its head again.

Stupid minister. Its their corrupt army, police and border control officers who allow people into their cowntry. They must do their job of keeping illegals out. They must just protect their side of the border by arresting anyone without documentation