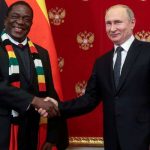 The Government of Russia has announced that foreign visitors from nine African countries and Hong Kong are completely banned from entering the east European country to curb the spread of the Omicron variant.

The new measures effectively cancel all earlier exceptions for diplomatic passport holders, travellers on a business visa, and some other categories of visitors.

Initially, Russian authorities said the entry of foreigners residing in Hong Kong or in some African countries would be “restricted” due to the spread of the new strain of the infection.

Russia joins a long list of countries around the world that have restricted visitors from south Africa where the Omicron variant was initially detected.

Other countries to have adopted the draconian measures include the United Kingdom, Israel, Australia, the United States of America, New Zealand, among others.

The Omicron variant was first reported in South Africa but later found to have been detected in the Netherlands at an earlier date.

On 26 November, the World Health Organisation (WHO) designated the B.1.1.529 coronavirus variant as a “Variant of Concern” and assigned it the Greek letter Omicron.

How is a ban on travellers from the mentioned countries going to help Russia et.al (seeing residents from those banned countries are free to travel to and fro countries that are not on lists of banned countries)? The Bible states that the mark of the beast is a number discernible by mankind as 666 (Revelation 13: 16-18). 6 + 6 + 6 = 18. The omicron strain of the virus was called (by someone or a group of people) B 1.1.529. If we leave out the letter B and focus on the numbers, 1 + 1 + 5 + 2 + 9 = 18! Could that result be a mere mathematical coincidence? What about the unfolding predictions of the Bible in the portion referred to above? Pray, sanitize, mask up and maintain social distance as much as you can and at all times.

We won't die like flies for God has perfect plans for us. This is not about covid 19 pandemic but something more political. Zambia and Malawi are not on the list because they have links with European countries while us and other sad countries on the list we are under the hands of the revolutionary parties which are considered as civil oppressors. They respect SA but their moves are sanctions indirectly impossed to ANC, Zanu, Fapla and others revolutionary parties in which they think it will taunt economic growth and cause civil unrest that will definitely push for regime change. We rely on tourism industry saka they have hit us hard and they know it

Russia our ALLY as well. Ndopaunoona kuti pane zvavanenge vachingoda kuno. They can't even trust the vaccines they been donating to us. Isu tichingoitiswa nxaaa. It seems like these people aren't happy that people from Africa didn't perish the way they expected. Ban them also from visiting us. Why should we be bullied by every Tom, Dick and Harry?
Vanoda kuuya kuno madiro vachiita zvavanoda nezvivanikwa zvedu asi vanhu vacho vasingavadi. I know for sure that, by now, almost everyone in Zim has been infected by Covid. Almost everyone akukosora, kuhotsira, nagging flue, headaches and many more Covid symptoms but vanhu vachingoona a chete.

Even the Bible says so: There is time for everything. Time for birth & time for death. uku ndiko kwava kufa kweCOVID. everyone must have it in their immune system then we can say tose tava immune from it.