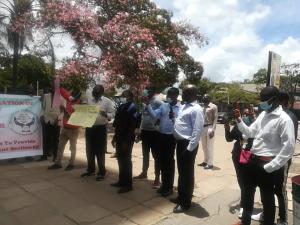 Members of the Amalgamated Rural Teachers Union of Zimbabwe (ARTUZ) who were arrested in Harare on 12 January this year while protesting low salaries and poor working conditions have vowed to continue to demand fair wages.

The 16 ARTUZ members were charged with participating in a gathering with the intention to promote public violence, bigotry and breaches of peace as defined in Section 37(1)(a) of the Criminal Law (Codification and Reform) Act.

ARTUZ president Obert Masaraure, who was among the arrested, said they will not tire until the Government restores their US$540 pre-October 2018 salaries. Said Masaraure:

The State only arrested our bodies, but our minds were free.

The teachers spent the whole weekend caged at the notorious remand prison, which ended up having a sewer burst on Saturday night, within the D class section, forcing officers to transfer dangerous criminals to Harare Central Prison.

15 of the 16 of the teachers were on Monday granted $5 000 bail each while one of the protestors was granted free bail.

Working as a teacher in Zimbabwe is now considered a peace-job of which one should be a full time vendor or dealer to have a reasonable source of income and just use the peanuts received from teaching to swipe rentals and other bills and buy airtime because thats only wat the teachers'salary can do. The unfortunate part is that the learner is the one disadvantaged by all this drama as the teacher will only attend work to clock in only and sit.

Pensioners(Civil servants)that worked for the Government since independence in 1980 were awarded after about 42 years of service less than Z$100 000 almost equivalent to a Parastatal CEO's monthly salary. This is ridiculous.