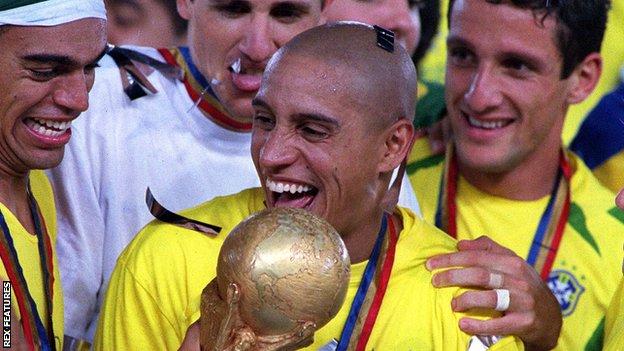 Roberto Carlos' brilliant, swerving free-kick for Brazil against France in 1997 is one of the most memorable goals in the history of football.

It's no wonder then that a pub team in Shropshire could hardly believe it when they learned the World Cup-winning full-back will play for them in a Sunday league match.

The Bull In The Barne won the services of Carlos - now 48 - in a 'dream transfer raffle' on eBay meaning he will appear as a substitute at one of their Shrewsbury & District games in February.

"You pay £5 to enter the raffle for a chance to have a pro sign for your team. One of our lads said in a group chat 'let's just give it a go' and we ended up winning it," striker and club secretary Matthew Brown told BBC Radio Shropshire.

"On Friday afternoon, our manager, Ed Speller, sent a message to say we won the competition and none of us believed him. We thought he was having us on.

"I went out on Friday night and woke up with a bit of a sore head on Saturday and I had messages from people saying 'is it true about Roberto Carlos?' and at that point I was thinking 'it can't have happened, it's just a dream'."

As well as lifting the 2002 World Cup, Carlos also won three Champions League and four La Liga titles with Real Madrid in his career, which ended in 2015 after a spell in India as player/head coach with Delhi Dynamos.

'A couple of the showers don't work'

So how will Bull in The Barne's facilities compare with those at the Bernabeu Stadium?

"We play on a pitch next to Hanwood Village Hall. The changing room is proper Sunday league, pretty basic, a couple of the showers don't work," Brown added.

"There has been talk of moving the game somewhere else because the car park is tiny.

"Our usual crowd is mostly just a couple of family members, but we do have two parents, Mr and Mrs Turrall, who are there rain or shine watching us."

Most of the Bull In The Barne team are of a similar age and grew up watching Carlos' exploits.

"He's probably one of the best left-backs the world has ever seen," Brown said.

"Liam Turrall is in my opinion the best left-back in Shropshire but he's probably going to have to take one game out for us - he's a cracking player but Roberto Carlos is another level.

"One of our lads decided a couple of weeks ago that he wasn't fit enough to do it any more and retired, but he's regretting his decision now, I think.

"I can imagine we're not going to be struggling for players for the next couple of weeks as they try to get into Ed's good books."

Communication between the star signing and his new team-mates shouldn't be a problem.

"I think he can speak English, eBay released a couple of videos - but I don't know if he'll understand the Shropshire accent," Brown joked.

So, what will happen if Bull In The Barne are awarded a free-kick in the other's team's half? Presumably they will just hand him the ball? Maybe not.

"We've got a couple of lads who want to show him what they can do first," Brown added.