Robbie Shakespeare, One Half Of The Duo, Sly & Robbie Has Died 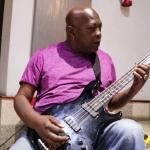 Robbie Shakespeare, one half of the duo Sly and Robbie, has passed away aged 68 years.

It’s been reported by The Jamaica Gleaner that Shakespeare had recently undergone surgery related to his kidneys. The Jamaican artist was hospitalised in Florida.

Shakespeare, an iconic bassist, formed Sly and Robbie with drummer Sly Dunbar in the mid-70s after having both worked separately in other bands.

After bonding over an affinity for reggae production, they went to work producing for other artists, with their breakout credit being Mighty Diamonds’ 1976 album ‘Right Time’.

Their production work led them to work with a myriad of acts throughout the decades, including multiple albums for Bob Dylan and Grace Jones.

Throughout their career, Sly and Robbie also went on to release several albums of their own, the last of which was 2019’s ‘The Final Battle: Sly & Robbie vs. Roots Radics’ which was nominated for Best Reggae Album at the 2019 Grammys.

When it comes to Reggae bass playing, no one comes close to having the influence of Robbie Shakespeare. He will be remembered for his sterling contribution to the music industry and Jamaica’s culture. May his soul Rest In Peace.

Jamaica’s minister of culture, gender, entertainment and sport, Olivia Grange, said in a statement that she was “in shock and sorrow after just receiving the news that my friend and brother, the legendary bassist Robbie Shakespeare has died.”

You did a great job rest in peace

Very sorry indeed to thefamily of Shakespear and tje Kamaicans at large .We have lpsy the icon of raggea bas.Mayhis sorrow rest in peace

Reggae is the music which sends a message. There is a history the truth and the rights. Leading the cause of the innocent ones, to comfort the oppressed and to keep them from wrong. Let the aged be protected and the innocent be strong, now roots radics rockers and the reggae - the late Bunny Livingtone aka Wailer. May their souls RIEP.

We salute you for your contribution to Reggae brother Robbie. May your soul rest internal peace. Jah - Rastafari.