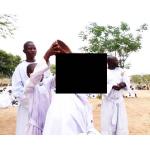 A Beitbridge businessman who lost R1.2 million and US$3 500 to armed robbers on 9 October allegedly consulted a local apostolic faith leader for divine intervention to recover his stolen money.

After the “consultation”, one of the suspected armed robbers, 32-year-old Freeman Ndudzo of Dulivhadzimo, who is also linked to a number of robbery cases in Beitbridge, was arrested by police.

The Zimbabwe Republic Police confirms the arrest of Freeman Ndudzo (32) on November 5, 2021, by detectives who were pursuing a case of unlawful entry and theft.

… The suspect is linked to several robbery cases that occurred in Beitbridge including the purported theft case of R1.2 million reported recently.

Ndudzo and his accomplices pounced on the businessman’s Beitbridge home and reportedly threatened to shoot him and his family while demanding cash.

Pictures and videos in possession of B-Metro show the businessman in white robes kneeling before Madzibaba Mutumwa receiving prayers.

When reached for comment the businessman confirmed that he consulted Madzibaba Mutumwa for divine intervention so that he could recover his money. He said:

It’s true that I consulted him (Madzibaba Mutumwa) and that is when he told me that the suspects would be arrested. One of them has since been arrested and appeared in court. I had no doubts that his prayers worked.

People should also know that when having such problems, it’s all about believing when one consults any man of God.