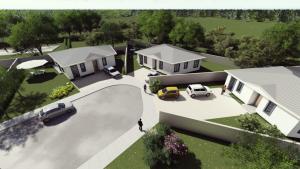 The Zimbabwe Lawyers for Human Rights (ZLHR) on Monday wrote a letter to Harare Metropolitan Province Secretary for Provincial Affairs and Devolution, Tafadzwa Muguti, over utterances he reportedly made as quoted in The Herald.

Muguti was quoted as saying that all houses and developments around the Robert Gabriel Mugabe International Airport area, including Arlington Estate and Retreat suburb face demolition.

Writing on behalf of Arlington Estates residents, the human rights lawyers demanded that Muguti should in 48 hours give a written undertaking that he is not going to proceed with demolishing residential properties.

ZLHR’s Tinashe Chinox warned Muguti that if he fails to do as requested by the residents, they will approach the High Court for redress.

The letter to Muguti was also copied to the Harare City Council, the Minister of Local Government, Public Works and National Housing and the Civil Aviation Authority of Zimbabwe (CAAZ).

In the letter, the human rights lawyer said the development of properties in Arlington Estate was done in accordance with the law, all the necessary approvals and inspections were done and approved by the Local Planning Authority and the residents obtained Title Deeds to their properties.

He said the intended demolitions constitute a violation of property rights as provided for in Section 71 of the Constitution.

Unotoshaya kuti zviri pai ......lets not tok of the number of houses that have been built already but type yedzimba dzacho amana n u just wake up on another side of the bed to destroy sm1's sweat fot years in seconds rily ???????? For real for real here amana @pindula apawo mumumopawonawo sei hmmmmmm ????

I DO NOT UNDERSTAND THE CRITERIA USED BY THE MINISTER OF LOCAL GOVERNMENT, PUBLIC WORKS AND NATIONAL HOUSING IN APPOINTING TAFADZWA MUGWADI AS YHARARE METROPOLITAN PROVINCE SECRETARY FOR PROVINCIAL AFFAIRS AND DEVOLUTION.

TAFADZWA MUGWADI IS UNPROFESSIONAL, UNDEPLOMATIC AND UNDEMOCRATIC IN THE WAY HE APPROACHES GOVERNMENTAL ISSUES. HE IS A DICTATOR IN HIS MAKING.

TAFADZWA MUGWADI IS DOING NO GOOD TO ZANU PF's CAUSE. HE IS ACTUALLY DECAMPAIGNING ZANU PF. HIS WINGS MUST BE CLIPPED.

The office that Mugwadi holds is a direct appointment from the head of state it's the same office that used to be called provincial Administrator, hes not alone as the country has 10 of them it's only that he's the most vocal

These guys are obsessed with destruction. Are we evere going to build anything in our country. nxa mhani.