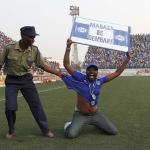 The return of the Castle Lager Premier Soccer League (PSL) is imminent after a two-year COVID-19-induced hiatus.

Premier football is set to return a week after the Chibuku Super Cup quarter-finals next weekend.

Clubs used the Chibuku Super Cup as a preparation for the resumption of the league and after last weekend’s final round of group matches, the quarter-finals take place this week.

The top-flight teams were given until yesterday to submit their ZIFA club licensing forms, with fixtures expected to be released soon after.

In correspondence sent to the 18 clubs on Thursday, PSL chief executive Kennedy Ndebele demanded that the ZIFA club licences be submitted to the league offices by1700hrs Friday, October 22, 2021. Ndebele said:

Kindly note that this form is required to be submitted before the release of the Castle Lager Premier Soccer League Championship 2021/2022 fixtures.

The PSL on Thursday also issued a press statement announcing the dates for the Chibuku Super Cup and the push back on the league kick start.

The league had been set to start on October 30, but that has since been changed to a week later.

They Sports and Recreation Commission allowed 2 000 spectators but Bhiza says the figure is too small for big clubs like Dynamos and Highlanders.

Yooh football is back......thankyou ZIFA
But pliz increase the number of fans

Bosso for life.Extend the number of fans pliz

At long last,I'll get to watch my beloved Dembare💕