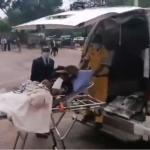 Harare magistrate Lazini Ncube granted an application by the state-led by Prosecutor Michael Reza, who urged the court to send her to jail so that she can be medically monitored.

Local medical doctor, Norman Matara said that for the former model to stand trial, both tests must confirm that she is fit. He said:

To be certified fit for trial, BOTH should be normal. If a person fails one or both aspects then the person is NOT fit for trial.

Speaking on the development, @maniearty said it was absurd that a doctor found Marry fit, physically to stand trial when it is visible that she is not well. Said @maniearty:

What is even more ridiculous is that the physical dr said she was fit and the psych said no. We all can see she’s not physically healthy, she very very ill and needs medical attention. Shame on @edmnangagwa and his loose VP Chiwenga. Our courts are now beyond redemption.

She is clearly not fit for trial. She needs treatment first how can you take someone to court with such wounds.

Marry is embroiled in a nasty divorce with the Chiwenga who is accusing her of trying to kill him.

Marry accuses the former army boss of abusing state institutions including courts and the security sector to inflict pain on her.

You are always in my prayers Mary

Even the devil is surprised with wattu doing.lets be humans ey.

Cdes and friends
The issue of Mary is now beyond normal, Genarari CNG Chiwenga shld reconsider his decision l beg him.
One can easily tell that its no longer court decisions but his hand is behind the court rule. Uuuuummm its painful and ridiculous on our side as a nation. It will not end with Mary Mubaiwa. Remember veld fires destroy innocent trees, bushes, grasses and macro and micro organisms