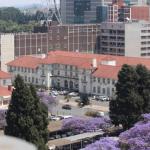 A Government official has warned Harare residents to be careful when buying residential stands as some council officials are selling stands using fake papers.

It must be understood by now that just because someone has papers from the council does not mean that everything is legally in good standing.

The majority of illegal developments in Harare and Chitungwiza have council papers which mostly were processed fraudulently.

The real mess is the council officials who are corruptly issuing land offers.

We will not tolerate such conduct as government.

Thousands of Harare residents have lost their entire savings after being duped by land barons with supposedly genuine council papers.

Most of the land barons allegedly work in cahoots with council officials to acquire fraudulent papers.

The City of Harare has some of its senior managers in court on allegations of selling land illegally.

Muguti added that both those who offer bribes and those who take them should be arrested for corruption.