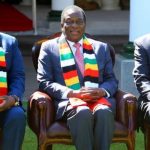 A Bulawayo resident Sibukekile Moyo has filed a police complaint against former Vice-President Kembo Mohadi’s son, Kgosidintsi, over a 2019 accident.

The accident reportedly happened on August 24, 2019, in Bulawayo and Mohadi, of Glen Lorne in Harare, paid a fine for driving without due care and attention.

Moyo told NewsDay that after the accident, Mohadi undertook to pay for the repairs to her car, as well as three other cars that were damaged as a result of his conduct. She said:

He had promised to fix my car, but he later kept quiet until I fixed my car using my own money. When I called him and told him I had fixed my car, he said I should keep the receipts and he would reimburse me. But until today, there is nothing and he has now blocked my numbers.

Moyo said Kgosidintsi owed her US$800 for the repairs, and that the former Vice-President had asked her to give him the quotations, but nothing materialised from him too.

She alleged that Kgosidintsi later claimed that he was a student, while his father was a civil servant and so they could not afford to pay that kind of amount.

Moyo added that Kgosidintsi blocked her number when she kept calling him.

Ooooh Shame so it's that Single servants do not have money and it's warranty to commit crime just take them to civil court period.

I won't be surprised if the police take absolutely no action. I don't blame them though, they receive their orders from the higher ups in zanu pf. The cops are just trying to keep their jobs even if they are underpaid.