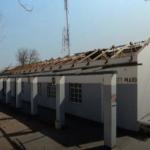 The renovation of Manama Mission Hospital in Gwanda district, Matabeleland South province has begun, a month after it was destroyed by violent winds.

The government has set aside $28 million to finance the refurbishment of the hospital mortuary and the maternity ward.

The hospital is one of the largest referral health centres in the province.

We have already started refurbishing the hospital. We have begun by repairing the roof of the maternity building. We started last week. We are hoping that this will help to change the situation and decongest some wards which were accommodating women who are now due for delivery.

We are rendering all services to members of the public. The hospital, which used to be run by a church is now under the Department of Civil Protection, after it was destroyed by a storm.

Reports indicate that Manama villagers had resorted to keeping the bodies of their late relatives at home, instead of taking them to the mortuary which has not been fully operational for the past four years due to malfunctioning refrigerators.

Last month, the deputy minister of Health, Dr John Mangwiro said part of the funds allocated to the hospital should go towards the refurbishment of the mortuary.