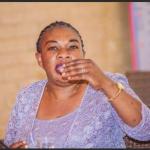 The MP is reportedly facing eviction from a Mufakose house where she has been failing to pay rentals since April.

Matsunga also made the headlines this year when her pirating Toyota Prado acquired after entering into a Vehicle Loan Facility Agreement with Parliament of Zimbabwe rammed into a precast wall before the driver sped off from the scene.

One of the landlords of the four-bedroomed house, Taonga Mupoperi said Matsunga’s problems started last year. He said:

Our differences started last year when she would skip paying rentals. She was also failing to pay bills resulting in the cutting of electricity supplies.

We actually had no serious problems at first as no one relied on the money for survival. It is a family house left by our deceased parents, but we saw that she was now taking advantage and decided to evict her.

Matsunga yesterday confirmed to H-Metro being at loggerheads with her landlord since April this year when she was given a notice. She said:

Why would they rush to the newspapers? They gave me notice in April and I was supposed to vacate in July.

However on July 11, I was served with an eviction order and went to my lawyers seeking advice.

I got the house through agencies and a lot of people were now coming to collect rentals. The agency had to step aside leaving the family to resolve its matters alone.

I then approached the civil court, but it was during the height of Covid-19 and we failed to get the necessary response. The issue has just been dragging since then.

She added that a court last week allowed her to stay at the house for 15 days while looking for another suitable accommodation.

Matsunga said she is surprised that the house owner handed her another 48-hour eviction notice.

She said she was not refusing to leave the house but was still searching for suitable accommodation.