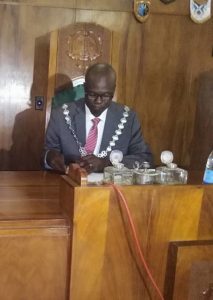 Former Gweru mayor Josiah Makombe, who was recalled by the Douglas Mwonzora-led MDC, has angered residents after he refused to hand over to the council a Toyota Prado that belongs to the local authority.

The four-wheel-drive SUV was bought in 2018 for US$170 000 as part of then town clerk Elizabeth Gwatipedza’s benefits. The vehicle was delivered by suppliers in 2020.

Gwatipedza is no longer a Gweru City Council employee after she was fired on allegations of gross mismanagement and abuse of office.

Makombe reportedly condemned the “extravagant acquisition” when the car was delivered but he is now clinging to the same vehicle.

Acting town clerk Vakai Douglas Chikwekwe confirmed to The NewsHawks that Makombe was yet to surrender the Toyota Prado to the council.

Meanwhile, Gweru Residents and Ratepayers Association director Cornelia Selipiwe condemned Makombe for his “selfishness” as he is refusing to return the vehicle at a time when the local authority is struggling to provide services to ratepayers. Said Selipiwe:

This is a clear testimony, a clear indication that when these councillors are elected into office they are not elected to serve people but their own egos, to fatten their own pockets.

I don’t see why council property is taken by someone for personal use. It’s all hogwash and nonsensical and it shows that as a city we are not going anywhere.

Why take the Prado that was moreover initially bought for the town clerk? This goes to show the level of selfishness of these people.

It’s really dangerous for the city and we will never progress as long as we have such deployees who are bent on milking our local authority.

How does one want to get terminal benefits when they are fired?

Selipiwe urged Makombe to do the “honourable thing” and surrender the vehicle to the council.

On Tuesday, ZESA disconnected electricity at the city’s water treatment plants at two of its main water sources White Waters and Gwenhoro dams.

Power was only restored on Friday following the intervention of Midlands Provincial Affairs and Devolution Minister Larry Mavima.