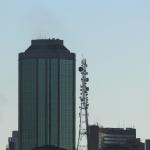 The Reserve Bank of Zimbabwe (RBZ) said that the Financial Intelligence Unit (FIU) is investigating several institutions including businesses and schools for currency manipulation.

In a statement issued by RBZ Governor John Mangudya today, the FIU will take punitive measures against currency manipulators, among them, imposing fines and freezing their bank accounts. The statement read:

The Reserve Bank of Zimbabwe would like to advise the public that the Financial Intelligence Unit (FIU) is currently investigating cases of breaches of the Bank Use Promotion Act and currency manipulations by some business entities.

The breaches have become particularly pronounced and prevalent at some schools and pharmacies.

The FIU will deploy all tools at its disposal to deal with such malpractices including the imposition of fines, freezing of bank accounts and blacklisting from the enjoyment of financial services.

Members of the public are urged to report offending businesses and service providers to the FIU on hotline numbers 0780434475 and 0714039897.

They can't go after those vendors because those same people are put on the streets by banks including rbz. This is why no matter how they see people suffer because of this RTGS they won't remove it because they benefit more

The RBZ is a very good story teller with no action.

WE FIND MONEY CHANGERS WITH NEW US$ IN THE MORNING AROUND 0600 HOURS WHERE WILL THEY HAVE GOTTEN IT FROM ?

{ BLUEPRINTS ARE EASIER SET THAN DONE }