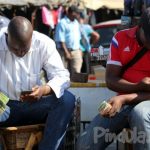 Reserve Bank of Zimbabwe Governor, John Mangudya, has said it is suicidal to act to narrow a widening gap between the national currency’s official and black market rates.

While the Zimbabwe dollar traded at 112.8228 to a United States dollar at the foreign currency auction conducted by the central bank this Tuesday while it trades at over 200 to the dollar on the black market. He said on Monday:

We would love convergence, but it requires the business community to also walk the talk. Convergence must be at a realistic exchange rate.

The unofficial rate will only surge even higher, decimate the earnings of citizens and lead to price hikes in the southern African nation, where annual inflation was 61% in December.

Business leaders have blamed the disparity on a lack of foreign currency supply though Mangudya says it’s due to many businesses accepting payment in US dollars at the unofficial, or parallel market, rate.

Meanwhile, analysts say the delay in resuming the weekly foreign currency auction only helped in promoting the parallel market as a source of US dollars.

The business community says it is struggling to obtain the foreign currency which it needs to keep operations running and is forced to turn to the parallel market.

I AM HAPPY FOR RBZ GOVERNOR FOR EXPLAINING REASONS FOR THE GAP BETWEEN OFFICIAL BANK RATE AND BLACK MARKET RATE.

RBZ GOVERNOR HOLDS THE REIGNS TO OUR ECONOMY. THEREFORE HE SOULD MAKE THE BUSINESS COMMUNITY WALK THE TALK, IF HE CAN NOT PERSUADE OR LAWFULLY FORCE THEM TO WALK THE TALK, HE MUST ASK HIMSELF WHAT HE IS STILL DOING THERE.

AT THE MOMENT OUR ECONOMY IS BEING DRIVEN BY BLACK MARKET AND THE GOVERNOR HAS ACKNOWLEDGED THAT THERE IS BLACK MARKETING WHICH IS INFORMAL. WHY DOES HE NOT FORMALISE THE BLACK MARKET SINCE IT IS THE ONE DRIVING THE ECONOMY ?

FOR HOW LONG ARE WE GOING TO ISOLATE AND SIDELINE BLACK MARKET YET IT IS THE ONE WHICH IS DRIVING OUR ECONOMY ?

THIS IS FOOD THOUGHT.

Mr Governor, the solution to our problem is very simple....dollarise the economy !!

The other day we read that gold reserves increased by almost 50% we need to have our own currency backed by our minerals instead of USD which we have no control over, in the long when USD appreciates or depreciates it will always leave us vulnerable

Report Abuse
The Accountant 4 months ago

Dollarisation of the economy can be very detrimental. YES IN THE SHORT RUN THE ECONOMY WILL BE REBOOSTED IN VARIOUS ASPECTS. IN THE LONG RUN IT WILL DISTROY THE ECONOMY THE PRODUCTION SECTOR WE WILL NOT BE ABLE TO EXPORT GOODS TO OTHER COUNTRIES AS THE PRODUCTS WHICH WILL BE PRODUCED WILL BE FAR EXPENSIVE for other AFRICAN COUNTRIES. NOW THIS WILL FORCE US NOT TO PRODUCE AND EXPORT RATHER TURN TO IMPORTATION SINCE EVERYTHING ELSE IN THE REGION WILL BE CHEAP FOR US CONSIDERING THE MONETARY VALUE OF THE DOLLAR. THIS WILL AFFECT THE ECONOMY FORCING IT TO CRUSH.

The economy is very complex... nothing is simple Mr Mufudzi wemombe, it's not like running a tuckshop