Public Service Minister Tells Unions To Stay Out Of Politics 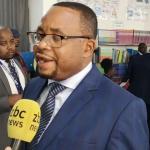 Public Service, Labour and Social Welfare Minister Paul Mavima has warned trade unions against pursuing political agendas under the pretext of advancing the interests of workers.

Mavima made the remarks after the United Kingdom (UK) Commonwealth Minister Tariq Mahmood Ahmad recently admitted that Britain was in constant contact with unions in Zimbabwe.

Bu speaking to NewZimbabwe.com this week, on the sidelines of the Tripartite Negotiation Forum (TNF) workshop underway in Victoria Falls, Mavima said:

In actual fact, we do not need any other confirmation than what Ahmad has said. It is enough evidence.

We do not stand against anyone’s political ambitions, but we are simply against the habit of politicians masquerading as trade unionists.

All we want is a constructive dialogue on labour issues. Unionists are free to join political parties as opposed to mixing the two.

We will soon be dealing with that matter.

We certainly have been meeting in Harare with various (workers’) unions, including teaching unions, most recently in September 2021 on salaries and the impact of COVID-19.

Trade unions form an important part of civil society in any country, and we engage with them at all levels.