PTUZ Report Back On Teachers' Meeting With Education Minister 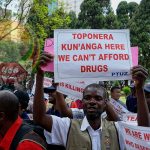 Teachers’ unions on Monday met with the minister of Primary and Secondary Education (MoPSE), Evelyn Ndlovu, over a number of issues including payment for invigilating ZIMSEC examinations. Pindula News presents a report back on the meeting issued by the Progressive Teachers’ Union of Zimbabwe (PTUZ):

PTUZ REPORT BACK ON UNIONS MEETING WITH MINISTER

The meeting was attended by six unions, ZIMSEC officials as well as the Minister and her staff. Unions were asked to make their presentations on a variety of issues, chief of which was presented was the issue of invigilation. Although unions made their case on the necessity of payment for invigilation, ZIMSEC indicated that they are paying teachers on marking and item writing duties because they would have been taken away from their stations. The Minister said that she could not authorize payment of invigilation allowance without an enabling legal policy framework dealing with that issue of remunerating teachers for examination management. She asked for time to solve teachers’ problems, including low salaries and invigilation allowances. In short, Cdes, we have not moved an inch as far as remuneration for invigilation is concerned.

RECOMMENDATION: It is regrettable that there has been no movement at all in relation to the issue of invigilation. That being the case, our members will still not invigilate examinations outside of a written contract with ZIMSEC. We hope the issue is solved expeditiously.

Invigilation should be part of their work which must not be paid for (although they deserve a better salary). Vanoda kubhadharwa for invigilating ko vanofanira kunge vachiitei during exams? The main objective for teaching the children is to make them write and pass the public exams which are from ZIMSEC. Therefore, the teachers have to guide the children kupedzisa rwendo rwawo. Just invigilate sezvamaingoita kare

Zimsec is an institution that stands on its own like hexco.Zimsec pays police for security,handsomely for that matter.They pay monitors who oversee exams,they pay markers ,they pay item writers ,they pay headmasters.Y not pay the invigilators when candidates pay exam fees that are even subsdised by gvt.Also no one must work formally without a written and signed contract.lf a teacher does wrong during exams he or she is charged or fired from the ministry of education.

Give them money, only

lts the employers mandate to look for money its never the employees fault that the employer is broke.lf everyone left teaching what would it solve?All employees are empowered by the constitution to air their grievances and labour laws dont allow anyone to work formaly without a contract.