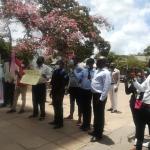 Progressive Teachers Union of Zimbabwe (PTUZ) president Takavafira Zhou has demanded the unconditional release of sixteen (16) teachers who were arrested by the police on 12 January 2022 in Harare while protesting poor salaries.

The teachers, who are all members of the Amalgamated Rural Teachers Union of Zimbabwe (ARTUZ), were on 13 January charged with participating in a gathering with the intention to promote public violence, bigotry and breaches of peace as defined in Section 37(1)(a) of the Criminal Law (Codification and Reform) Act.

In a statement this Monday, Zhou said the jailing of the teachers is callous and unjust, and a violation of the Constitution and labour conventions. Below is Zhou’s full statement:

As a follow up to our Twitter solidarity message with our colleagues in ARTUZ, we reiterate our call for the unconditional release of 16 teachers including the president of ARTUZ, Obert Masaraure.

Their incarceration is callous and a monument of Zimbabwe injustice, violating the national constitution and Labour Conventions.

The rights to demonstrate and assembly are guaranteed in the national constitution and Labour Conventions.

Arresting teachers for merely reminding their employer that they are hungry and starving consequent of a meagre salary can never be condoned in a country 42 years after independence.

As PTUZ we call upon all teachers and all teacher unions in Zimbabwe to amplify the call for the release of our 16 comrades behind bars.

Their call for the restoration of the purchasing power parity of teachers’ salaries, is a clarion call for all teachers in Zimbabwe.

As we call for the immediate unconditional release of our colleagues, we remind the government that only US$540 and education sector-specific allowances are a panacea to the challenges faced by teachers.

According to the Zimbabwe Lawyers for Human Rights (ZLHR), the unionists were arrested outside the offices of the National Social Security Authority, the state-run pension fund.

Zimbabwe Republic Police (ZRP) officers claimed that the teachers were staging an anti-government protest demanding to be paid their salaries at the figures, which obtained before October 2018, when they were paid US$540 per month.

The ARTUZ leaders and members, who are represented by Idirashe Chikomba, Trust Maanda and Tinashe Chinopfukutwa of Zimbabwe Lawyers for Human Rights.

YES, TEACHERS' UNIONS HELP EACH OTHER WHEN ONE OF YOU IS IN PROBLEMS.

IN FACT IT IS NOW TEACHERS UNIONS ONLY WHO ARE NOW FIGHTING FOR GOVERNMENT WORKERS. IN THE PAST IT USED TO BE YOU, DOCTORS AND NURSES. NOW DOCTORS AND NURSES HAVE BEEN NUETRALISED BECAUSE THE MAJORITY OF THEM HAVE LEFT GOVERNMENT EMPLOYEMENT FOR GREENER PASTURES ABROAD.

FIND PEACEFUL AND LEGAL MEANS TO FREE YOUR COLLEAGUES WHO HAVE BEEN CHARGED WITH VIOLENCE, BIGOTRY AND BREACHRS OF PEACE.

IF YOU PLAN TO SEE THE PRESIDENT, THIS IS YOUR OWN DECISION. THE PRESIDENT IS A LISTENING PRESIDENT. HE MAY LISTEN TO YOU AND HELP YOU.