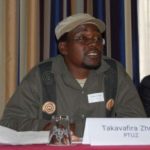 The Progressive Teachers Union of Zimbabwe (PTUZ) has dismissed as false reports that it was working with the British government to topple the Zimbabwean government. The teachers’ union said it was merely pushing for a better wage for teachers. PTUZ has been leading the campaign to have teachers boycott invigilating ZIMSEC examinations if the government does not commit to paying them allowances. Said PTUZ president Takavafira Zhou:

Instead of restoring the purchasing power parity of teachers’ salaries and allowing ZIMSEC to sign contractual agreements for invigilation of public examinations, Gvt (through ZBC News) has adopted a trajectory of falsehoods, accusing PTUZ leadership of working with the British for regime change.

We are aware of the African proverb that when a leopard wanted to eat its young ones, it first accused them of smelling like a goat. Govt is such a leopard in this scenario. Such ludicrous hallucination is not only baffling but the madness of the worst order. Govt must learn to shoot at the message rather than blaming the messenger. There is an urgent need to restore teachers’ salaries to a pre-October 2018 level of an average of US$540.

A win-win situation over invigilation of public examinations can only be reached through a contractual agreement between ZIMSEC and teachers and payment for such invigilation.

Attempts to silence Ptuz leadership through cheap blackmailing would not work, let alone find traction among teachers. The ball is now in teachers’ courts. It’s high time teachers must stop standing on the touchline to watch a game they should be playing. It is important for teachers in schools to liberate themselves from Zimsec abuse.

We have, as PTUZ, notified both ZIMSEC and PSC, let alone copied communiques to the line Ministry. The time for practical action at the theatre of struggle, viz, schools, to influence decision making and a swift address of the impasse between teachers and Zimsec is now. No amount of false accusation will stop an idea whose time is up. No pay, no invigilation, must henceforth come into effect.

No to slave wages