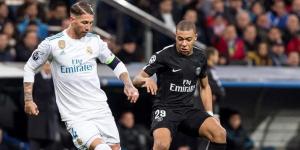 Real Madrid have reportedly wrapped up an agreement to sign Paris Saint Germain (PSG) striker Kylian Mbappe on a free transfer this summer.

The PSG forward is out of contract at the end of the season and has yet to extend his current arrangement at the Parc des Princes.

From January 1, Mbappe has been free to negotiate with clubs from abroad ahead of sealing a pre-contract agreement.

Real Madrid have been chasing the World Cup winner’s signature for several months, having seen multiple bids rejected in the final throes of last summer’s window.

And PSG could now be staring at losing out on £170million, with Madrid reportedly set to sign him on a free transfer… paying him a cool £200million total salary to move to the Santiago Bernabeu.

BILD reports that Mbappe will sign a five-year contract with a basic salary worth more than £40million-per-year.

The two European heavyweights meet in the last-16 of the Champions League next month and the German publication state that confirmation will not come before those two legs have been played.

Mbappe has been in fine form for PSG, netting 19 goals and 15 assists in 27 appearances, but has made it clear that he would be looking to move on.

He told RMC Sport last year that he would leave PSG in a deal that will make the club receive a transfer fee so that they could bring in a quality replacement. He added:

This club has given me a lot, I have always been happy [during] the four years I have had here, and I still am.

Madrid to the world 3_1Psg kk