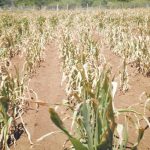 The prolonged dry spell being experienced in the country has left farmers in Mashonaland Central Province fretting as crops planted soon after the early rains have started wilting.

The Meteorological Services Department (MSD) predicted normal to above normal rainfall for the 2020/21 season but there has been no rain in the province in the past three weeks.

Speaking during an interview with NewZimbabwe.com on Monday, the chairman of the Bindura Farmers Association Rodwell Choto said the rains may come too late for some farmers. Said Choto:

I don’t want to lie, the rains are already late and even if they come today, we fear that we might have no bumper harvest next year.

We fear for the farmers who had already borrowed inputs from the banks. They might not harvest enough to repay. This is a tough time.

Choto urged farmers to resort to traditional grains such as sorghum, millet and finger millet that are drought tolerant.

A Bindura farmer, Simbarashe Gomwe, told NewZimbabwe.com that they may be forced to dump long-season varieties as the current summer season has been shortened by the dry spell. He said:

We farmers have been affected adversely by this dry spell that we are experiencing this year.

With the excessive rains that we received last year; we were hoping that this year was a good year as well.

Right now, we should have crops growing but we are still stuck. We have done our land preparation and this will force us to abandon the long season of varieties that have got the potential of yielding highly because our summer season is going to be shortened by this dry spell. So our profitability is going to be affected big time.